I’m fairly ashamed that as many blogs as I’ve written and as many amazing experiences I’ve had on safaris, I still haven’t written about any of them extensively.

I have to start with what was to me probably the most incredible experience of all of them. As part of my time in Botswana, I was working with an amazing NGO called Journey of Hope, which focuses on raising awareness about breast cancer as well as conducting screening events and helping pay for follow-up tests. They are often invited my companies or organizations to conduct these events, and one such opportunity was happening in November. Wanting to understand the flow of these events better since they were important to my research and not understanding what ‘Mashatu’ meant, I gladly signed up. Shortly before we left I learned that Mashatu was a very nice lodge located in Tuli Game Reserve, in the eastern tip of Botswana. The camp manager was a breast cancer survivor herself and wanted to use her story to benefit all the women working in this lodge, nearby lodges, and one of the few large farms that’s located in Botswana since it’s also in the area. Therefore they were housing us and feeding us for free, even though I otherwise I could not have afforded to stay there. They wanted us to have a great experience so gave us.

At the screening event at the farm, I learned that the Mashatu lodge had been named after a tree bearing the same name. They tend to be huge, tall, and magnificent structures which can only get sufficient water to sustain themselves near riverbeds. The farm had one such tree and it was quite the sight to behold, as you can see in the photos above.

After taking our pink van across a dry river bed, which in and of itself was quite the adventure, we crossed into the game reserve and arrived at a small airport where we were going to get picked up. Two guides met us in a typical game vehicle, and we did our first game drive (for those unfamiliar, this term implies seeing not hunting) on our way to the lodge. It became clear pretty fast what kind of experience this was going to be. They heard from another driver that there were some cheetahs out, so we headed that way. The sighting was spectacular- golden hour, a mom and 4 cubs. The cubs would rub against each other and lick each other affectionately while mom was making sure they were safe and cleaning them up as necessary. I also just love the way cheetahs lay down. Probably because of their tall, thin bodies (much different from the leopard), they always lay on their side. Getting there doesn’t look extraordinarily smooth- they flop over on their side and sprawl out. Whenever they’re moderately interested in something they lift their heads a little bit to not exert too much effort.

The story of this family is actually a particularly interesting one. The mom actually was chasing some game a few years ago when she got too close to a bush and a hard branch cut into her chest- the downside of being able to run 70 mph. She would have died, except that a group got together and stayed around her to keep any other animals that may try to finish her off (mostly lions and hyenas). They called in a specially trained vet who actually did surgery in the field to close up her chest, which allowed her to return to health. With cheetahs being a highly endangered species, efforts like this resulting in 4 healthy cubs is a pretty big deal.

That evening and night we could hear a lion roaring in the distance. They assured us that their call travels very well from far away and wasn’t actually on our doorstep. So when we went out for a drive the next morning, we knew they might be close; we were right. As we were driving along we saw a big male lion probably 20-30 feet from the path, which is how I was able to get these gems. He looked at us intently for a few minutes which didn’t make us extremely comfortable, but then decided we weren’t interesting enough and flopped over to go back to sleep. It’s ok for us to be near many animals in the truck, since as long as we don’t stand up they don’t really understand there are individual people on board. All they see is some large, unknown but benign animal that doesn’t concern them. As king of the jungle lions kind of do whatever they want, which is usually nothing. The small cut below his left eye might mean he was involved in a tussle in the days before I saw him.

But the lion was just a detour that didn’t detract us from our final destination- a spotted hyena lair. Now, if you’ve seen lion king, you probably have a strong distaste for these animals. They’re regarded as conniving, malevolent, and dangerous. I’ll say that I didn’t have a very favorable view of them going into it, but after seeing them in their lair I actually feel quite favorable toward them. In this community were hyenas from ~2 week old babies to older adults. They played together, sometimes rough like biting each other’s ears but often just romping around like puppies or kittens. They are also brawny creatures- you can see their muscles ripple as they walk around. Their somewhat hunched backs make them look a little bit odd, but they would be formidable to deal with. I also respected how well adapted they are to survive in harsh environments. Their preference is to eat carcasses that were killed by other animals, since obviously that’s the easiest. Even if another carnivore is done with it, hyenas can finish anything off, including bone. Their strong jaws and osseous culinary preference means that their dung is the primary source of calcium for leopard tortoises in the region. If they can’t find anything to scavenge, they’re also quite good hunters and can work as a pack to get things done. On our way out we also saw 2 of them jumping around in the river together (video above)- it was so cool to see them enjoying each other in their native environment.

More from the Hyena Lair (lots of babies!) 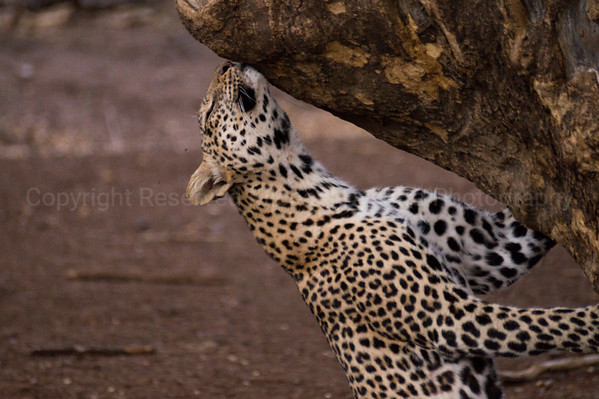 After a day of work promoting breast cancer awareness, we had another drive in the evening. We didn’t have quite as much time as initially expected since the event ran long, but we really wanted to see a leopard. Mashatu is known for it- there are many leopards in the area who love to spend their days up in the trees or in thick bushes. Still, we struggled for a long time to try to find one. The area with a resident family offered no success, as did driving along the riverbed looking into mashatu trees. We got a call from another driver that a leopard was spotted about a 15 minute drive from where we were. Our guides asked if we wanted to try for it, knowing they don’t always hang around very long, but we went for it. After whipping around in the bush, we stopped in a wooded area. The leopard walked toward one of the big trees, put its front paws up to rub against it, then came down and walked just a few feet from our truck before disappearing into the distance on the other side. They’re by far the hardest of the Big 5 to find, and they’re such regal cats. I was so happy to have seen one, as it was my main goal of the trip (other than the NGO work, of course).

We had one more game drive the following morning. I was so happy with everything we’d already seen that I’d honestly have been happy with just about anything, but more fortune was with us. We saw a few elephants including a little one, then heard more lions calling- we could tell they were in 2 different locations and were probably trying to find each other. It took some searching, but eventually we found them. Not just 2 lions, we had 4 cubs (probably something like a year old), 2 lionesses, and one male lion all is close proximity. This is where I got the cover  shot of this blog, which is one of my favorites of the year and is currently hanging on my dad’s wall at home. Watching them hang out together from so close up in the wild was pretty amazing. At this point I’d seen lions before but hadn’t seen cubs so that was a special experience. You’ll notice they have some different markings than adult lions, most prominent on their legs. The manes on male lions don’t start growing manes until they’re at least 3-4 years old, so these little guys have a while before they’ll look more mature.

And as we were driving back to what we knew would be a fantastic breakfast, one of our guides spotted more big cats in the distance. I could barely make them out even when he pointed at them. So we of course drove over to them, and found it was a mom with 2 juvenile cubs- not quite full grown but further along than the cheetah’s we’d seen the first day. They were also playing around until they saw a little springbok in the distance, when they all sat at attention for a while. In the end it was too far off to be worth their time, and we left them to spend more time sprawled out under the tree.

So as you can see, this was a pretty amazing experience. In addition to the great safaris were some very nice and comfortable rooms which I couldn’t have afforded if I were paying for them. I enjoyed many safaris I went on, but I think this one takes the cake.