In Botswana, there are a several parks which are most well-known. I’m writing these blogs in the order that I saw them, and it’s also approximately the order of how well they are known internationally. Tuli, where I went to Mashatu, is known in some select circles for their ease in finding leopards there relative to everywhere else in the world, but is typically not in the first 2 places that tourists would visit in the country. The Okavango Delta is probably the most well-known and arguably the best safaris in the world since the land has never had much influence from humans and has more than enough water to support diverse wildlife; it will be the subject of my next blog.

Chobe is known largely for african elephants, which I have decided are my favorite animals to see on safari. During my first weekend at Madikwe in South Africa, we asked our guide Justice what he most liked to see. “Elephants,” he said, “since they’re always doing something.” It’s so true. Are lions and cheetahs absolutely beautiful and thrilling to see? Absolutely. But the vast majority of the time they’ll be passed out under a tree. Elephants, however, have such high nutritional and water requirements (about 100L of water per day), they are always on the move in search of more plants or water.

One of the most amazing things is that in Northern Botswana, the national parks are not fenced off. Animals can roam literally anywhere they want. This can cause some disturbance in towns that have resources an elephant wants (more on this later), or could lead to seeing an elephant in the middle of the street while you’re driving along. We had one close encounter with an elephant eating by the side of the road. He could have probably picked up my little Mazda Demio with his trunk. There’s a campsite where I stopped on the way up called “Elephant Sands” which has an artificial watering hole, making it a favorite hangout spot for the gentle giants. So from a chalet or restaurant you can be no more than a few feet away from these magnificent creatures. I did have a scare with an elephant which was hiding behind a chalet which I startled- he fortunately took off running in the other direction. It was also a beautiful place for sunsets and bird-watching, as I think you’ll see.

Still, the Chobe River is very special. I heard estimates that as many as 100,000 elephants can live there at one time, though the population can roam around as they please so it’s never a fixed numbers. Since there are about 130,000 total in the country between here, Tuli, the Okavango, and anywhere that isn’t fenced, the population in Chobe is probably often lower than that, but it’s impressive regardless.

We went on a boat cruise and a game drive to see the region from the water and land. It’s absolutely swimming with life. Lechwe, a rare form of antelope which only resides in the wetlands of south central Africa, are prolific. Hippos can be found peeking at you out of the water or grazing on the grasslands near the water. Crocodiles sunbathe on the shoreline. Baboons run and shout at each other in big groups. Massive herds of well over 100 cape buffalo lazily look up at you with water and grass still hanging out of their mouths. Giraffes peek out at you from behind the trees until bending down to sip water from the river while having companions keep an eye out for predators.

I’d like to write a little more about some of these fascinating animals. Let’s start with hippos. I don’t like hippos. I perceive that in the west we often perceive them also as gentle giants whose pudgy, leather sides you’d love to cuddle up against. Anyone who has spent any time near them knows they are actually savage beasts who attack and kill more humans than any other animal in Africa (excluding disease spread by mosquitos, of course). Nature works in mysterious ways but I must say I’m disappointed that a vegetarian could claim the title of deadliest animal in Africa over lions, leopards, crocs, etc. Feels like a waste. From this picture I hope you can see their sharp teeth which they use to aggressively defend their territory from anything that gets in their way. They’re also surprisingly agile for their looks. They can run 35 km/hour (over 20mph), nearly equivalent to Usain Bolt’s average speed in a 100m dash and 6 mph slower than his top speed. That is to say, if a hippo is chasing you, you’re best chance is probably to outrun the next guy. They can also swim very well so don’t jump into the water in hopes of escape.

Crocodiles are the 2nd deadliest animal in Africa. They typically grow up to about 14 feet in length, though I didn’t see any who’d reached that side yet. They’re extremely skilled at stealth, often surprising animals coming for a drink at the river. I have to say, I actually find them beautiful in some pre-historic dinosaur way. Looking into their eyes I feel like I’m transporting back to a time when creatures more similar to them ruled the earth. Needless to say, between these 2 animals, swimming in this river is not advisable.

Cape Buffalo are also no pushover. They’re actually the third biggest killer of humans in Africa, and hold the impressive title of killing more big game hunters than any other species. The challenge with these guys is that they have been known to charge without warning. So within seconds you can go from comfortably watching magnificent creatures from afar to having your life endangered by scores of huge, powerful animals with horns. Cattle egrets can be found near them at all times since when these mammoths walk, they disturb the insect life in the area. These insects are ideal bird food, so they benefit from them. One thing I was surprised about was that they're actually very good swimmers and regularly traverse the river. It's hard to envision such a heavy hoofed animal having that ability, but they do it well. Cape buffalo always look a little bit upset, but I guess they were just born that way.

The bird life in the region is also quite amazing. My personal favorite is the fish eagle. It looks much like a bald eagle, except that the white on the head extends down into the chest. They’re incredible birds. There are also some pied kingfishers that can be seen perched on branches of trees or hovering over the water waiting to dive. There are some storks around, including both the open-billed, which uses its unique beak structure to feast on mollusks, snails, and other shelled creatures, and the marabou stork which looks and acts suspiciously like a vulture. There are also a number of herons, including the tiger heron which I first encountered in Latin America. 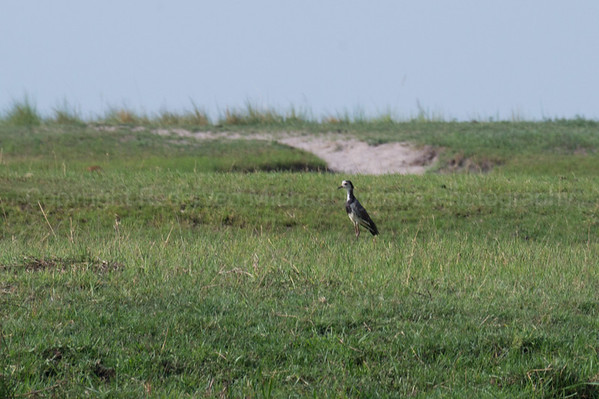 The water monitor lizards were an unexpected treat. They’re quite large and colorful.

There were lions in Chobe, however since it’s not allowed to drive off-road, it was difficult to get a good look at them. I still managed to get a few decent shots of them through the leaves, but on our way back there was a bona fide traffic jam by the lions as everyone tried to get their glimpse. Since this was after the pictures you saw in the last blog, I'd been a bit spoiled and was ok to move on. 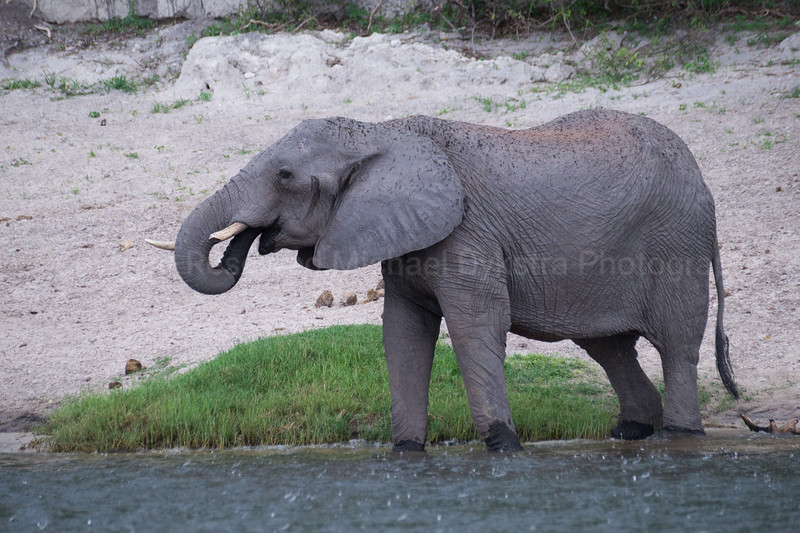 Lastly, elephants. Among the smartest animals, they have a fairly complex maternally-dominated social structure. The children and females travel in herds ranging from a few to 100 elephants, while the bulls are more likely to travel independently or in small groups. They have a very tough trunk and GI tract, so it’s common to see them eating thorn bushes. They weigh up to 6 tons. It’s rare for any other animals to challenge them, though it’s possible for a pride of lions to take down a young or weak elephant who is separate from the pack. Because of this the herds are often oriented in a way that the little one is always kept in the center so they can be protected should the need arise. But for the average elephant, their life expectancy is actually more dependent on dental hygiene than on the presence of predators. It has long been noted that wetlands become elephant graveyards. Our romantic view of these animals lends us to believe that this is because of some sort of cultural or spiritual significant of these places, but in reality it’s actually related to nutrition. As their teeth become less robust, they must eat wetter and easier shrubbery to stay alive. Eventually they simply can’t get enough nutrition and/or water and die a peaceful death near their ancestors. Another thing I love about elephants is their eyes- their eyelashes are so long and beautiful, covering their mysterious and complex eyes.

Elephants Huddling Around a Little One

Needless to say, Chobe lived up to the hype. I’ve heard that some people say even more elephants than we did, but I have no complaints. Chobe’s proximity to Victoria Falls also increases its attractiveness to see both in one trip.